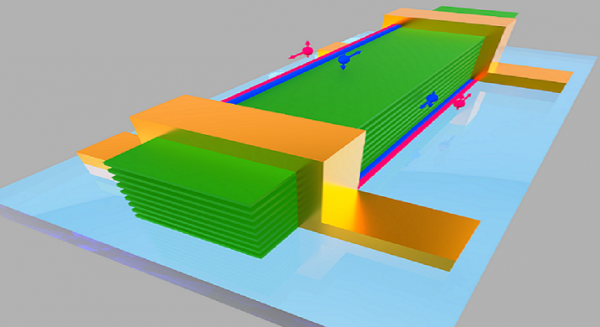 Td-WTe2 (non-centrosymmetric and orthorhombic), a type-II Weyl semimetal, is expected to have higher-order topological phases with topologically protected, helical one-dimensional hinge states when its Weyl points are annihilated. However, the detection of these hinge states is difficult due to the semimetallic behaviour of the bulk. In this study, we have spatially resolved the hinge states by analysing the magnetic field interference of the supercurrent in Nb–WTe2–Nb proximity Josephson junctions. The Josephson current along the a axis of the WTe2 crystal, but not along the b axis, showed a sharp enhancement at the edges of the junction, and the amount of enhanced Josephson current was comparable to the upper limits of a single one-dimensional helical channel. Our experimental observations suggest a higher-order topological phase in WTe2 and its corresponding anisotropic topological hinge states, in agreement with theoretical calculations. Our work paves the way for the study of hinge states in topological transition-metal dichalcogenides and analogous phases.