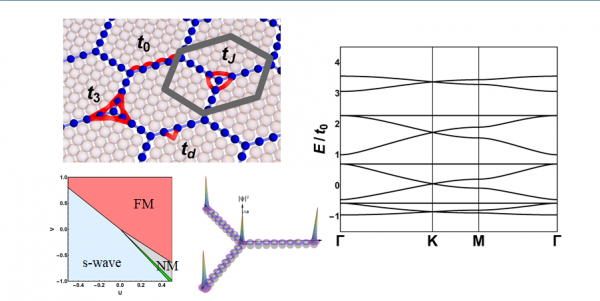 Caption: (a) Emergent honeycomb network in the nearly-commensurate charge-density wave (NC-CDW) phase of 〖1T-TaS〗_2. (b) Band diagram and (c) phase diagram (the superconductivity and the magnetism) of the honeycomb network. (d) Localized electrons in the higher-order topological phase.

We propose a new principle to realize flatbands which are robust in real materials, based on a network superstructure of one-dimensional segments. This mechanism is naturally realized in the nearly commensurate charge-density wave of 1T−TaS2 with the honeycomb network of conducting domain walls, and the resulting flatband can naturally explain the enhanced superconductivity. We also show that corner states, which are a hallmark of the higher-order topological insulators, appear in the network superstructure.