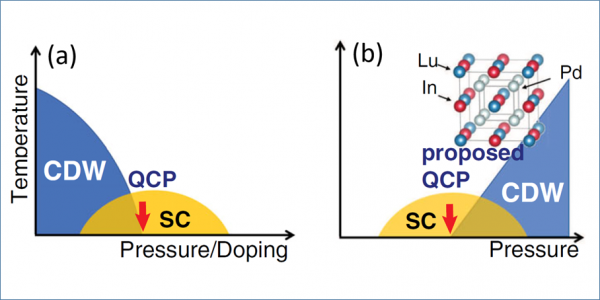 We investigate the pressure effects on the electronic structures and phonon properties of rare-earth-based cubic-Heusler compound LuPd2In, on the basis of ab initio density functional theory. We find the occurrence of intriguing phase transition from the superconducting (SC) to charge-density wave (CDW) state under pressure (P), which is quite unusual in that the pressure is detrimental to the CDW state in usual systems. The SC transition temperature TC of LuPd2In increases first with increasing pressure, up to PC ≈ 28 GPa, above which a quantum phase transition into the CDW state takes place. This extraordinary transition originates from the occurrence of phonon softening instability at a special q = M in the Brillouin zone. We thus propose that LuPd2In is a quite unique material, in which the CDW quantum critical point is realized under the SC dome by applying the pressure.