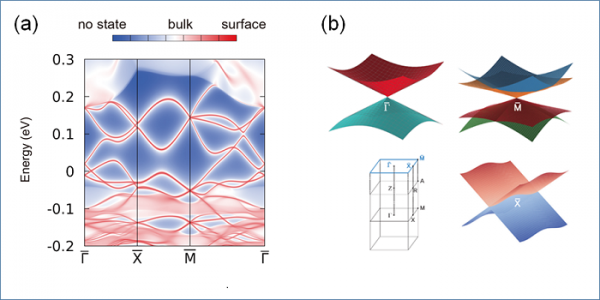 It has been recently predicted that nonsymmorphic crystalline insulators can host two exotic topological surface states (TSSs). One is “hourglass fermion" and the other is “wallpaper Dirac fermion". For the former, a few real materials were predicted and already confirmed experimentally. For the latter, however, no bulk-insulating and experimentally accessible candidate has been identified yet. Here we show that the localized 5f-electrons in PuB4, the single crystal of which was recently synthesized and was found to exhibit Kondo-insulating nature, form a closed manifold over the Brillouin zone via the Kondo coherence effect at low temperature, and host hitherto unobserved wallpaper Dirac fermions at the nonsymmorphic symmetry-preserving (001) surface. The topological nature of TSSs in PuB4 can be described by topological invariants of two Z4 indices (χx, χy) = (1, 1) of double-glide symmetries of p4g wallpaper group, and thus PuB4 is a three-dimensional nonsymmorphic topological insulator that exhibits the TSSs of peculiar fourfold surface Dirac fermions as well as twofold double-glide spin-Hall and nodal-line-type fermions. On top of interesting 5f-electron Kondo insulating nature, unique fourfold wallpaper Dirac fermions in PuB4, which are quite distinct from previously-reported nonsymmorphic Dirac-insulator or hourglass TCI fermions, would broaden our recognition on the embedded fermions in strongly-correlated Kondo systems with nonsymmorphic symmetries.