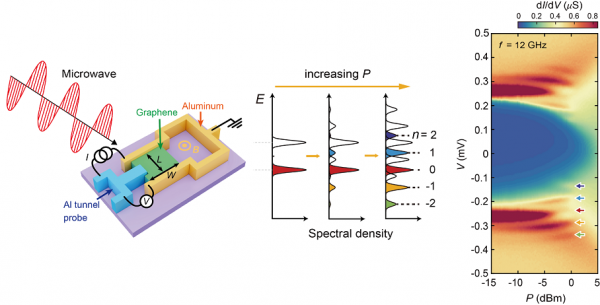 Engineering quantum states through light-matter interaction has created a new paradigm in condensed matter physics. A representative example is the Floquet-Bloch state, which is generated by time-periodically driving the Bloch wavefunctions in crystals. Previous attempts to realise such states in condensed matter systems have been limited by the transient nature of the Floquet states produced by optical pulses, which masks the universal properties of non-equilibrium physics. Here, we report the generation of steady Floquet-Andreev (F-A) states in graphene Josephson junctions by continuous microwave application and direct measurement of their spectra by superconducting tunnelling spectroscopy. We present quantitative analysis of the spectral characteristics of the F-A states while varying the phase difference of superconductors, temperature, microwave frequency and power. The oscillations of the F-A state spectrum with phase difference agreed with our theoretical calculations. Moreover, we confirmed the steady nature of the F-A states by establishing a sum rule of tunnelling conductance, and analysed the spectral density of Floquet states depending on Floquet interaction strength. This study provides a basis for understanding and engineering non-equilibrium quantum states in nano-devices.