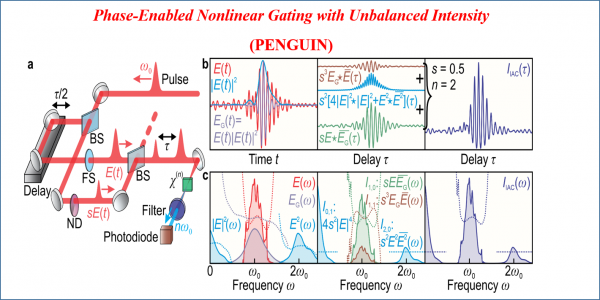 a A collinear Mach-Zehnder interferometer is modified by inserting a variable neutral-density (ND) filter into one arm to adjust its relative field amplitude (balance factor s) before nth-order harmonic generation. The residual fundamental is removed via a short-pass filter and only the harmonic radiation is recorded as a function of the delay by a spectrally integrating detector such as a photodiode. BS: beam splitter, FS: fused silica plate for dispersion matching. b Time-domain relationship between an exemplary optical field (red, left panel) and the resulting unbalanced-intensity nonlinear IAC (right panel), consisting of cross-correlation components (denoted by star operators, middle panel) between different field powers (left panel). c Frequency-domain representation of b showing spectral magnitudes (solid lines) and phases (dotted lines).

Nonlinear autocorrelation was one of the earliest and simplest tools for obtaining partial temporal information about an ultrashort optical pulse by gating it with itself. However, since the spectral phase is lost in a conventional autocorrelation measurement, it is insufficient for a full characterization of an ultrafast electric field, requiring additional spectral information for phase retrieval. Here, we show that introducing an intensity asymmetry into a conventional nonlinear interferometric autocorrelation preserves some spectral phase information within the autocorrelation signal, which enables the full reconstruction of the original electric field, including the direction of time, using only a spectrally integrating detector. We call this technique Phase-Enabled Nonlinear Gating with Unbalanced Intensity (PENGUIN). It can be applied to almost any existing nonlinear interferometric autocorrelator, making it capable of complete optical field characterization and thus providing an inexpensive and less complex alternative to methods relying on spectral measurements, such as frequency-resolved optical gating (FROG) or spectral phase interferometry for direct electric-field reconstruction (SPIDER). More importantly, PENGUIN allows the precise characterization of ultrafast fields in non-radiative (e.g., plasmonic) nonlinear optical interactions where spectral information is inaccessible. We demonstrate this novel technique through simulations and experimentally by measuring the electric field of ~6-fs laser pulses from a Ti:sapphire oscillator. The results are validated by comparison with the well-established FROG method